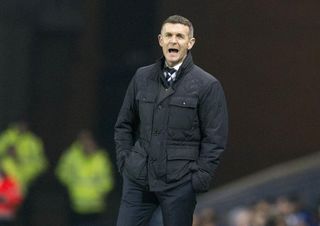 Dundee manager Jim McIntyre insists he is not fearing for his job ahead of his scheduled meeting with managing director John Nelms on Monday.

There has been growing speculation surrounding McIntyre’s position following Dundee’s relegation to the Championship last weekend but, speaking after his side’s 1-0 win over Livingston, he says is he only focusing on planning for next season.

McIntyre said: “I’ll speak to him on Monday. My expectation is it will be to discuss the way forward regarding budgets and how we’re going to go about bouncing straight back up.

“I’m fully focused on the job of trying to get us back up there next year. If they make a decision [to sack him] there’s nothing I can do to affect that – I’ve got to concentrate on doing my job.”

There was a relief for McIntyre at ending a 10-game losing streak, even if the result comes too late to spare Dundee from relegation. Kenny Miller scored the only goal of the game after 11 minutes, his first since December.

The manager added: “We were playing today to end the losing sequence we were on which has been horrendous for everyone and culminated in our relegation.

“It’s been a tough week for everyone, there’s no getting away from that and, as good a result as this was, it won’t take away from the fact that this will take us a few weeks to get over.

“I was really delighted for the players today because it’s been a difficult week and it’s a horrible feeling, not one I want to experience again. I’m just glad we stopped the rot.”

Livingston manager Gary Holt expressed his relief that this was a match with very little riding on it.

“We spoke about desire and hunger to play at this stage of the season so it’s disappointing that we seem to be giving gifts of goals away and not taking responsibility on the pitch to make something happen.

“Today that level of intensity and belief wasn’t there. In the first half we had four really good chances. But overall we were flat. The intensity level on and off the ball was brutal.”