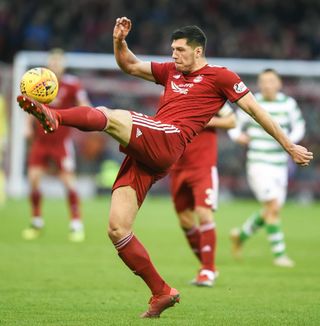 Scott McKenna was the Aberdeen goal hero as the Dons opened up a crucial three-point gap over Kilmarnock, who finished a fractious Ladbrokes Premiership encounter at Rugby Park with eight men.

Killie defender Kirk Broadfoot was shown a straight red card by referee Steven McLean in the 36th minute for catching Dons goalkeeper Joe Lewis in the face with his boot.

The home side fell behind in the 66th minute when the Scotland defender headed in a Graeme Shinnie corner and then defender Stuart Findlay was sent packing for picking up the second of two yellow cards for a foul on the Pittodrie captain before midfielder Rory McKenzie was dismissed in added time.

It was not a game for the purists but the narrow win took Aberdeen into third place with four fixtures remaining and a Europa League place up for grabs.

Dominic Ball was eligible as he received two yellow cards at Hampden while Stephen Gleeson and Michael Devlin came back in.

Killie striker Eamonn Brophy returned from injury to replace Kris Boyd and in the eighth minute he forced Devlin into a yellow card tackle just over the halfway line as he attempted to race through on to a long ball.

The home fans howled for referee McLean to be less lenient, remembering the Dons stopper had been sent off earlier in the season for a similar foul on the same player.

It was all hustle and bustle, laced with plenty of niggle.

Aberdeen’s burly striker Sam Cosgrove was cautioned for a foul on Killie skipper Gary Dicker and was let off for a foul soon afterwards on Findlay, who was booked for pushing the Dons player to the ground as they waited for McKenzie’s free-kick to come in.

Broadfoot could not quite control the ball and went in on Lewis in a bid to recover it and with the Englishman left on the ground and requiring treatment, and players from both sides crowding around, McLean produced the red card. The official was booed off by irate Killie fans at half-time.

Perhaps sensing Cosgrove may not finish the game, McInnes replaced him at the interval with James Wilson and soon afterwards McKenna and Kilmarnock defender Greg Taylor picked up yellows for their part in a goalmouth melee.

The Dons got themselves ahead in simple fashion, McKenna rising six yards out to head Shinnie’s corner down on to the pitch and up into the net.

Killie responded and in the 73rd minute right-back Stephen O’Donnell broke the Aberdeen back line only to see his shot blocked by Ethan Ross for a corner, which came to nothing.

Then, with five minutes remaining, Findlay was shown a second yellow for a foul on Shinnie and to top it all off, McKenzie walked for a tussle with Ball.

It was that sort of game but one which in the end, favoured the Dons.