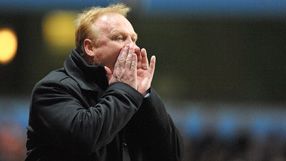 City fell into the drop zone following an impressive performance by Wolverhampton Wanderers in the final minutes of last season.

The Villains are currently languishing just five points above the bottom three and are suffering a series of injury concerns ahead of their clash with Liverpool.

But McLeish is confident he won’t suffer the fate of relegation for a second successive season.

"I don't believe it will happen. That is my school of thought. I know the media will bring it up, that's fine, I can handle that," McLeish replied when asked about the thought of back-to-back relegation.

"It will maybe be on the tip of everyone's tongue. It is not something I believe will happen.

"I'm sure the players will think about it as well, as they are only human. They were in a battle last season, so they've been through it, and they've got to do it again this season.

"Every week will be a battle but we are only three points off West Brom, and have a game in hand."

McLeish has conceded it has been a difficult season for Villa as the club goes through a rebuilding process.

"I never thought it was going to be easy this season. We have a lighter squad than Villa had this time last season," he added.

"I knew from that point of view it was going to be a big challenge again.

"But I'm confident the players can rise to the challenge and make sure we are okay this season."