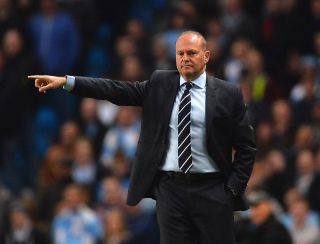 West Brom conceded three first-half goals as they suffered a 3-1 defeat at the hands of title hopefuls Manchester City in Premier League action on Monday.

The West Midlands club's fifth away defeat from seven games has left them languishing in 16th position after 34 games, three points above the relegation zone with a game in hand.

With strugglers Sunderland, Fulham and Cardiff City enjoying success recently, Mel knows Saturday's clash at The Hawthorns will play a crucial role in their bid for survival, and the Spaniard has called on West Brom fans to play their part.

"It really is the most important game," Mel said afterwards.

"It can be the game that spurs us on and gives us that life.

"I hope the stadium will be full and the fans will be with us so they can help us win the game."

West Brom found themselves trailing inside the opening three minutes at Etihad Stadium after Pablo Zabaleta guided his header past Ben Foster.

The visitors thought they had restored parity soon after courtesy of Matej Vydra's effort but the Czech Republic striker was the victim of a dubious offside call after Billy Jones was flagged during the build-up.

"We have seen the images on the television and it was really tight," he said.

"Every time there is a tight decision it seems to go against us."

Meanwhile, West Brom look set to be without Liam Ridgewell for the visit of West Ham after the defender limped off during Monday's loss.