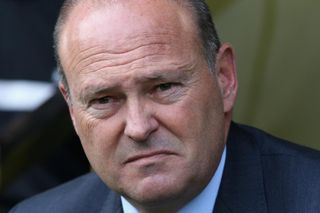 The Midlands outfit are 16th in the table, three points above the relegation zone but with a game in hand over three of the four sides below them.

Ahead of West Ham's visit to the Hawthorns on Saturday, the Spaniard believes four points – that would take their tally to 37 - will see them secure their top-flight status for another year.

"What we really have clear is that we need four points from the last four games," Mel said.

"Last year 36 was actually the cut-off point. I think 37 will be enough to keep us up.

"Saturday is the final. There is only one match."

Mel feels his side will have no issues playing another high-pressure game and said he is expecting a response from Monday's 3-1 defeat at Manchester City.

"We've played under pressure recently in games against Cardiff (3-3 draw), Norwich (1-0 win) and Tottenham (3-3 draw), and in these three games we've done very well," he added.

"In the last six (matches) we've won two and drawn two, so I believe we are ready.

"The (Manchester) City game really was very difficult, particularly with us being 2-0 down inside 10 minutes.

"But some of the performances we have seen recently are those we need to see in order to keep ourselves up."