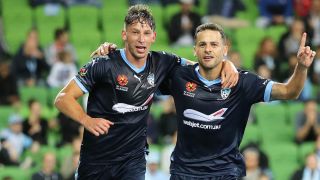 Sydney moved 11 points clear of Melbourne Victory at the top of the table thanks to the Brazilian striker, who moved onto 10 A-League goals for the season with his double.

Graham Arnold's men had suffered their first league defeat of the season last time out against Western Sydney Wanderers, but responded impressively against City at AAMI Park.

They moved ahead in the 24th minute when Bobo scored a penalty after Manny Muscat had fouled Filip Holosko in the area.

City responded within 65 seconds when Nick Fitzgerald impressively found the top corner, but the hosts' hopes of completing the comeback were heavily dented when Muscat received a second yellow card six minutes before half-time for taking down Alex Brosque.

Sydney made their numerical advantage count when Brandon O'Neill curled in a free-kick in the 56th minute, before Bobo sealed the victory from close range after being found by Milos Ninkovic with 23 minutes remaining.

City's defeat means they stay third, a position that will be lost if Brisbane Roar can avoid defeat against Wellington Phoenix on Saturday.

Here are the fulltime stats from Harvey Norman Friday Night Football at ! Was it a deserved win? February 24, 2017