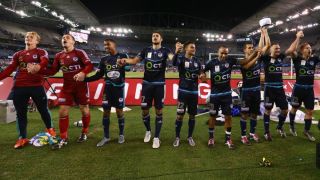 Melbourne Victory leapfrogged Sydney FC in the A-League standings as Matthew Jurman's 79th-minute own goal handed the hosts a 1-0 win at Etihad Stadium.

Jurman produced an impressive display within a dogged defensive performance from Sydney but lunged at the near-post to cut out a low cross from substitute Jesse Makarounas and turned the ball into his own net.

Victory forward Besart Berisha failed to beat Sydeny goalkeeper Vedran Janjetovic with an early one-on-one but they were largely frustrated against last-season's grand-final foes before the late breakthrough.

Sydney could have gone top of the table on goal difference with a two-goal win they rarely appeared interested in chasing and remain three points behind neighbours and leaders Western Sydney Wanderers on 27 points.

Melbourne Victory are fourth by virtue of scoring more goals this season than their defeated opponents.