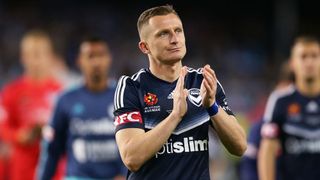 Kevin Muscat described Melbourne Victory's dramatic loss in the A-League Grand Final as "gut-wrenching" and insists it was underserved.

Victory came into the final as massive underdogs after hosts Sydney FC had dominated the regular season, finishing 17 points clear.

But Muscat's men seized the lead through Besart Berisha and ultimately took the match all the way to penalties, where they lost 4-2 after 120 minutes of action had finished in a 1-1 draw.

And the Victory boss felt his players had done enough to earn a shock victory, James Troisi having hit the post in extra time.

"I can cope most things, but to walk in there now and see the looks on their faces with the amount of effort they played with, to come in and outplay Sydney for long periods of the game, we were spot on with what we did," Muscat told Fox Sports.

"The execution of what we asked the players to do was spot on and sometimes you have got to try and explain to them how they lost the match and this is one of those occasions because that group of boys didn't deserve to lose."

Congratulations to Daniel Georgievski, the Joe Marston medallist as player of the Grand Final May 7, 2017

He continued: "I can take it, but I'm just bitterly disappointed for the players. That is the gut-wrenching thing for me, looking the players in the eye and somehow explaining to them how they have lost.

"It was an unbelievable effort from our team. They worked so hard coming into a cauldron like this, where no one gave us a sniff or a chance of winning and we were only an inch away in the end to winning.

"Some pieces of luck just didn't go our way and it could have been so different, but that's life, that's football. It's hard to find the words. They didn't deserve to lose that."