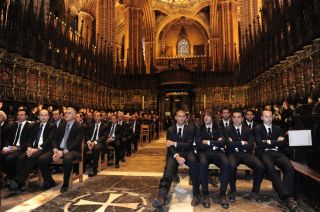 Vilanova, who served as assistant to Pep Guardiola before taking charge of first-team affairs at Camp Nou, passed away at the age of 45 following a lengthy battle with throat cancer.

After succeeding Guardiola for the 2012-13 season, Vilanova guided Barca to the Liga title with a club-record haul of 100 points.

However, his sole campaign in charge was interrupted by illness and he was forced to step down last July.

The club confirmed on Friday that Vilanova had passed away and mourners - including his family - gathered at a packed Barcelona Cathedral on Monday to pay their respects.

Cardinal Archbishop of Barcelona Lluis Martinez Sistach led the ceremony, which was attended by members of the club's playing staff, including Carles Puyol, Andres Iniesta, Xavi and Victor Valdes.

Representatives from the board of directors were also present, with president Josep Maria Bartomeu stating: "Today we say goodbye to a very loved person.

"I promise you, he will always have a place in our hearts and we will never forget him."

The service was also attended by delegations from Barcelona's fellow La Liga clubs, as well as teams from further afield, including Manchester City, Benfica and Fiorentina.

Former Barca defender Eric Abidal, who has faced his own battle with cancer, also spoke earlier in the day about his desire to be in attendance.

"I remember that not long ago, he sent me a photo of when we had won a title and the two of us posed holding up the cup," he told Barca TV. "Both of us had to face a tough fight and we shared many things.

"We spoke a lot. For me it was more important than ever to be her close to his family and the Barca family as a whole."