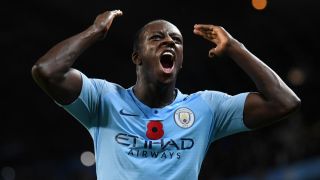 Manchester City have announced defender Benjamin Mendy has had knee surgery but have not stated how long they expect him to be sidelined.

The left-back played the whole of City's 3-1 derby win over Manchester United last Sunday, but withdrew from the France squad with what was described by the French Football Federation (FFF) as "a sprained left knee and meniscus injury".

City issued a statement late on Wednesday confirming Mendy had been operated on following medical checks at a clinic in Barcelona.

"Manchester City can confirm that Benjamin Mendy has undergone surgery on his left knee tonight," the Premier League champions said.

"The Frenchman, who played the full 90 minutes in the weekend's 3-1 win over rivals Manchester United, travelled to join up with his national team before withdrawing from the squad.

"The 24-year-old defender attended Dr. Cugat's clinic in Barcelona where scans revealed that surgery was required.

"That surgery was conducted on Wednesday evening and everyone at Manchester City wishes Benjamin a speedy recovery."

Mendy tore the anterior cruciate ligament of his right knee in September 2017 and did not return to action for City until April 22 this year.

His latest injury is thought to be less serious, although it remains unclear how long he will be out of action.

Mendy has made 11 appearances for Pep Guardiola's side this season in all competitions.

Mendy later tweeted via his personal account, saying: "Other knee was jealous but the operation went well and it’s all good now."

Other knee was jealous but the operation went well and its all good now be back soon guys u just have to found another FPL captain for some games November 14, 2018