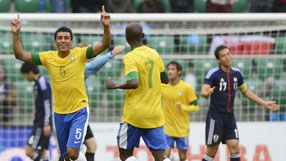 Brazil's 6-0 thumping of Iraq followed by Tuesday's 4-0 win over Japan have convinced Menezes that he is on the right track as he builds a side capable of not only winning the 2014 World Cup but doing so in a style home fans are demanding.

"We have been working towards finding the ideal national team," he told reporters after the 2014 hosts outclassed Japan in the Polish city of Wroclaw.

"We've hit a few obstacles on the way, but now are getting closer to what we have been hoping for.

"It's obvious that scoring 10 goals in two games is a lot, something out of the ordinary, but the important thing is what the team did to produce those goals.

"Those results are to the credit of the team that is taking shape."

Menezes took over at a point where Brazil's production line of world class players appeared to have dried up.

A shortage of creative midfielders had forced Dunga to depend on Kaka at the 2010 World Cup, even though he was not fully fit after a series of injuries.

Menezes initially placed his hopes on playmaker Paulo Henrique Ganso but he was overhyped by the media, plagued by injuries and then fell out with his club Santos

Although Brazil have won most of their games under Menezes, they were knocked out of last year's Copa America at the quarter-final stage, failed to win an Olympic gold and have lost high-profile friendlies to Mexico, Germany and Argentina.

However, the emergence of Chelsea midfielder Oscar and the return of Kaka, who scored against Iraq and Japan on his first Brazil appearances since 2010, have given Menezes plenty of cause for optimism.

Another key has been the recent introduction of Paulinho alongside Ramires which has given Brazil two defensive midfielders with the ambition and ability to attack, a contrast to the purely destructive pairings employed in the past.

Menezes even believes that he can now play without a conventional centre forward, something he had discarded only three months ago.

"We have been working on this idea of leaving the team without a reference point for a long time. It hadn't really worked out but now we have midfielders who allow this," he said.

Menezes said that the presence of Hulk alongside Neymar in attack also gave Brazil a physical presence.

"We have three attacking technical players [Oscar, Kaka, Neymar], but you can't make a team just with players with those characteristics," he said.

"Hulk has physical power, he produces a different kind of threat and he compliments the other three."