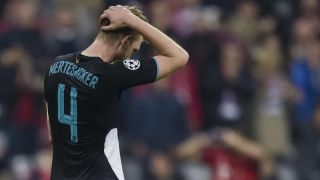 Centre-back Per Mertesacker felt Arsenal did not show the bravery they did in beating Bayern Munich two weeks ago as they slumped to a 5-1 Champions League defeat in Germany.

Robert Lewandowski opened the scoring with his 18th Bayern goal of the season after 10 minutes and, by the time Thomas Muller doubled the advantage before the half-time, Arsenal's 2-0 victory over the Bundesliga champions at Emirates Stadium seemed an increasingly distant memory.

Mesut Ozil had a goal ruled out for handball between those efforts and David Alaba scored one and made another for Arjen Robben either side of half-time.

In-form striker Olivier Giroud pulled one back with a well-taken strike, but a rampant Muller rounded off the scoring to leave Arsene Wenger's team staring at elimination from Group F after Olympiacos' late win over Dinamo Zagreb.

"They scored too early for us and then they got into a rhythm that was too difficult for us to go again," Mertesacker told BT Sport

"After that we scored the equaliser, but I heard that it was handball.

"That could have given us a little bit more confidence. It is very disappointing."

It was a particularly torrid outing for Arsenal in wide areas as Bayern repeatedly tore at them down the flanks and Mertesacker added: "They are absolutely amazing in one-v-ones.

"At home we had much more courage to play the ball with more bravery.

"They were brilliant. We have to admit it, we have to analyse quickly. But with this game we are very disappointed."

Arsenal must now beat Dinamo and Olympiacos in their final two group matches, overcoming the latter by a greater margin than the Greek champions' 3-2 win in London, while hoping Bayern defeat the Marco Silva's men next time out.

"We have to win both games and get at least two goals in Olympiacos," Mertesacker said.

"We have gone through even more difficult periods and it is not over."

Arsenal face fierce rivals Tottenham in the Premier League on Sunday and Mertesacker urged them to regroup.

He added: "We must bounce back quickly – put negative energy away and bounce back."