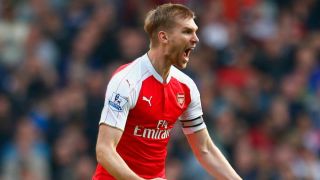 Bayern Munich have evolved into a tougher opponent this season, according to Arsenal centre-back Per Mertesacker.

Arsene Wenger's side welcome the Bundesliga leaders to the Emirates Stadium on Tuesday in a crunch Champions League meeting for the hosts.

Arsenal - who sit bottom of Group F after starting their campaign with defeats to Dinamo Zagreb and Olympiacos - were eliminated by Bayern in the round of 16 last season.

The German feels the addition of players such as Arturo Vidal and Douglas Costa prior to this campaign makes the Bavarian side even more formidable this season.

"Due to the two defeats, we are facing one of the biggest challenges that a club can face," Mertesacker said in an interview with Kicker.

"It is hoped that you can get closer over the years, but the problem is that Bayern are constantly evolving, conjuring up new players like rabbits out of a hat, which again make the difference.

"That makes it even more difficult to beat them at the moment."