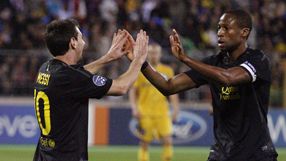 The World Player of the Year headed the third just before the break and smashed the fourth high into the net to equal Ladislau Kubala as Barca's second highest scorer of all time with 194 goals.

Messi, 24, is now only 41 goals behind top scorer Cesar Rodriguez.

"As [coach] Pep Guardiola said on the weekend we are watching history being made," Barca´s other Argentine Javier Mascherano told Spanish radio.

"We should try and enjoy it, because we know it will be very difficult to see another player like him."

An own goal from BATE´s Aleksandr Volodko in the 19th minute and a header from Pedro three minutes later had set Barca on course for a victory in which they barely broke a sweat. David Villa wrapped up the scoring at the end.

Barca had started their title defence with a 2-2 draw at home to AC Milan two weeks ago and went level on four points with the Italians at the top of the group after Milan won 2-0 at home to Viktoria Plzen.

BATE set their stall out with 10 yellow shirts staying back and former Chelsea striker Mateja Kezman a very lonely figure up front as Barca were utterly dominant.

The visitors at first found it crowded and did not get a clear sniff of goal until Daniel Alves floated a cross in towards the back post and Volodko turned the ball into his own net under pressure from Messi.

BATE were quickly two behind when an similar move, this time from left to right, saw Villa dink a ball over the defence and Pedro arrived before hesitant home keeper Aleksandr Gutor to head home.

The visitors were almost playing at walking pace when Gutor gifted them a third, fumbling a straightforward cross under his bar and Messi nodded into the open net in the 38th.

It was only Messi´s second headed goal in the Champions League, after the one he scored in the final win over Manchester United two years ago.

After a lengthy period of possession in the 56th minute, Alves pulled the ball back for Messi, who despite being surrounded by five defenders rifled a shot into the top corner.

Villa rounded off the scoring, breaching the offside trap to slide home the fifth in the 90th minute as Barca matched their biggest ever away win in the Champions League.

"It was a comfortable result, we hardly had any problems but that was because we took it very seriously from the first minute," Mascherano added.