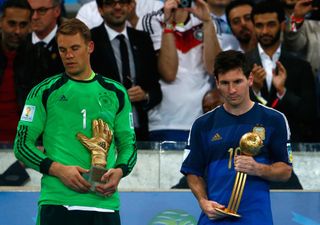 The Barcelona forward netted four times as Argentina topped Group F in Brazil and held off Colombia's James Rodriguez - the competition's top scorer - among others to claim the player of the tournament award, despite his form tailing off during the closing rounds.

Argentina coach Alejandro Sabella said: "Messi played a great World Cup. He was absolutely fundamental to us getting where he did. He deserves any award."

Germany's Manuel Neuer added the Golden Glove gong to his winner's medal as the Bayern Munich number one was named the best goalkeeper in the competition.