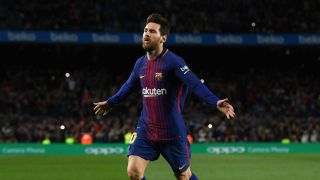 Eden Hazard believes Lionel Messi's continued brilliance means Chelsea will be able to take little comfort from Neymar no longer playing for Barcelona when the sides meet in the Champions League.

The Premier League champions and LaLiga's leaders meet in one of the most attractive last-16 ties later this month, with Chelsea's star forward poised for his latest chance to shine on the biggest stage.

When asked by Marca how Barca shape up now Neymar is plying his trade with Paris Saint-Germain, Hazard alluded to a familiar dangerman.

"You know, they have a guy who is not from this world," he said.

"He's different, a superclass. But this is not about one player, it is about the whole team."

Chelsea have suffered a collective slump of late, with Hazard's fine solo goal not enough to stave off a damaging 4-1 loss at Watford last time out.

Nevertheless, facing an in-form Barcelona is a prospect that sparks excitement rather than trepidation for the Belgium star.

"It's a beautiful match," he added. "This season we are not the same as last season, of course, and they are very good but in the end it is a cup tie and you never know what happens.

"That's why we love football. I'm pretty sure we can beat them if we play together. We'll see."