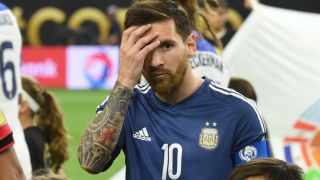 There are no doubts Lionel Messi will lead Argentina at the 2018 World Cup in Russia, according to national team masseur Marcelo D'Andrea.

Messi announced he will retire from international football after suffering defeat in the Copa America Centenario final against Chile last Sunday.

The loss was the fourth time Messi has tasted defeat in a major tournament final, leading to the 29-year-old's decision to quit internationals.

However, D'Andrea revealed Messi did not notify anyone of his decision within the camp, and is confident the Barca star will represent Argentina once again.

"I trust him in his silence. He loves the national team and he will do everything for his country."

He added: "No one knew anything about Messi's retirement. He didn't say anything in the locker room.

"It is the hardest blow he has received with the national team, without doubt. He is one of my best friends and it is hard to see him how he is feeling."