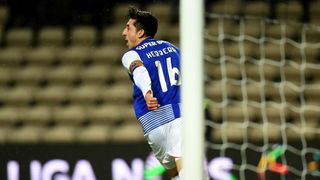 Hector Herrera and Jesus Corona scored while Miguel Layun had an assist as the trio of Mexican internationals led Porto to a 5-0 victory over Boavista.

Sunday's match was the first Liga NOS game for Porto since the club fired head coach Julen Lopetegui after a defeat to rival Sporting and home draw with Rio Ave. Former coach Rui Barros was on the bench as the interim manager for the victory.

Corona extended the lead in the 62nd minute. The winger, who celebrated his 23rd birthday last week, took a pass in the midfield and drove forward. He cut to his left to get past two defenders near the corner of the box and fired in with his left foot.

Layun set up the third goal of the match, the first of a double by Vincent Aboubakar. The left back rushed forward and curled a low cross in to the Cameroonian striker.

Both El Tri attackers made way before the end of the match, but Layun played the full 90 minutes. Both Corona and Layun were booked during the match.