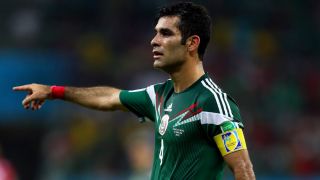 Veteran Mexico defender Rafael Marquez is on course to feature at his fifth World Cup after being named in Juan Carlos Osorio's provisional squad for Russia 2018.

The former Barcelona centre-back recently made a farewell appearance for his club Atlas, and bowing out on the biggest stage with El Tri was earmarked as a perfect end to Marquez's career.

However, the 39-year-old has not played international football since last year's Confederations Cup after being sanctioned by the United States Treasury for alleged ties to a drug trafficking organisation.

"I believe that my legal counsellors have already addressed the issue so I'm still excited, I still keep the huge dream of ending my career in that way," he told ESPN in April.

Marquez missed out on selection for the finals in France in 1998 but has featured as captain at every World Cup since for El Tri.