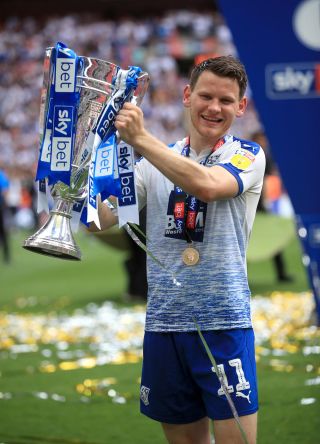 Jennings scored with 90 seconds of extra time remaining, heading home from close range to earn Rovers a 1-0 success against Newport at Wembley and secure back-to-back promotions.

It came just a fortnight after his grandad died and 12 months on from going from being in a coma to helping his side win promotion from the National League a week later.

Mellon said: “I am so pleased for him, I don’t want to get too romantic and emotional but he has had a tough couple of weeks.

“He lost his grandad, we never even knew. He just went out and played against Forest Green (in the semi-final).

“We knew something was up with him, he wasn’t himself and he just went out and played and we found out later on that his grandad had died that day.

“We knew he was a tough cookie. A story like that is what football is all about, I am really pleased for him.

“If you’d have told me everything that happened to him I’d have said it was from a comic book.”

Newport manager Michael Flynn questioned why the League Two play-off final is at Wembley if they are not going to use the Video Assistant Referee.

Flynn saw his side miss out on a first-ever promotion to League One, but the story could have been different had referee Ross Joyce awarded Newport an 85th-minute penalty when Emmanuel Monthe clattered into Jamille Matt.

Flynn was furious in his post-match press conference, teeing up a rant on the decision with the line “now for the good bit”.

He suggested the game should not be played at the 90,000-seater stadium unless they are going to make full use of the facilities.

He said: “We are at the home of football, Wembley, we have got VAR, we have got equipment, we have got referees who are full-time referees and a big decision today has absolutely killed us.

“It is a stonewall penalty and I cannot believe it was not given. That is my frustration. We have seen the replay, 100 per-cent penalty.

“It is a very poor decision, it is a play-off final, you can’t get big decisions like that wrong. It is not a Mickey Mouse game.

“I hope that they bring it in for the next two games because you don’t want big decisions going against teams and costing them promotion.

“We have got the facilities here, they want the final at Wembley, there is 25,000 here, there is 8,000 for the Conference, if they are not going to use all the facilities at hand, what is the point of having them here?”

Mellon, whose side completed back-to-back promotions, added: “I am not going to be bothered about VAR, I have just got promoted.

“I have sat here and lost, it is really, really hard. It is tough to lose here.”