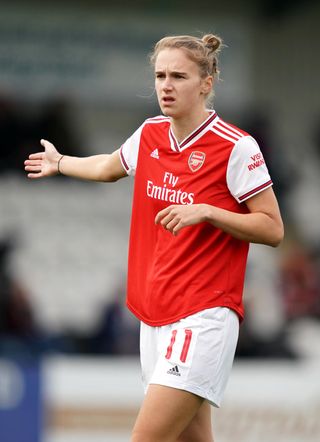 Ever since the Holland international moved to England in May 2017, players from both senior teams have had equal access to the club’s London Colney training base.

Such a move has allowed the women’s team – now defined by the club under the same “first-team” umbrella as Mikel Arteta’s Premier League side – to make use of all the facilities previously installed for their male equivalents.

It also led to the likes of Rob Holding and Jordan Nobbs completing their respective rehabilitation from serious knee injuries together in another show of solidarity between the sides.

While the reigning Women’s Super League champions are yet to grace the Emirates Stadium pitch for a competitive fixture, being in and around the men’s set-up has had a positive impact, according to Miedema.

“To be honest, we are quite lucky at Arsenal,” the 23-year-old, who previously played for Bayern Munich, told the PA news agency.

“When I walked in here two-and-a-half years ago it was like this already so I’m not used to anything else.

Back on the grind at London Colney 👊— Arsenal Women (@ArsenalWFC) February 5, 2020

“At Bayern we trained in a completely different area and we didn’t feel part of the club but here if you come in in the morning you see the men’s players and it just feels like home.

“There is always going to be contact, with some of the boys more than the others, but if you go to an Arsenal shoot or a kit shoot you know each other already.

“The contact is there and it is only a good thing, for me it is how it should be. It shouldn’t be ‘women here, men there’ if you do it right as a club, you do it how we do it here.

“That for me is the thing as well, why ‘men’s football’ and why ‘women’s football’? We all share the same passion and we all go through the exact same experiences so it can only help each other improve and get better.”

Arsenal lifted the WSL title last season – in no small part down to the 22 goals in 20 games scored by Miedema, who was then voted PFA women’s player of the year for her efforts.

But she was full of praise for the impact made by manager Joe Montemurro, who arrived at Arsenal soon after Miedema.

“I think coming to this club, the first three or four months were really complicated and difficult,” she added.

“But then him (Montemurro) coming in and doing what he has done to the club was really important, not just to us but the whole club.

“No-one expected us to win the league last year and that is a lot of credit to him, the way we play really suits us and we all really enjoy it.

“Even this year I think we still have played great football even though we are struggling a little more right now.

“But I definitely feel his philosophy is how we want to play as a team and if you have that connection with a coach and if you trust in his game-plan then it is always going to help you on the pitch so that is a really good thing for us.”