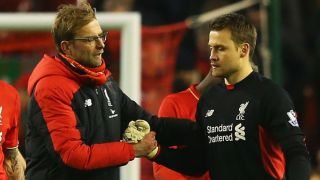 Liverpool goalkeeper Simon Mignolet says Jurgen Klopp's faith in him as number one at Anfield was a key reason behind him agreeing a new five-year deal on Merseyside.

The Belgium international's new long-term contract was confirmed on Monday, although Mignolet has come in for criticism at times this season due to some inconsistent performances.

However, Klopp has constantly backed his goalkeeper - dismissing the prospect of bringing in Jack Butland of Stoke City or Barcelona's Marc-Andre ter Stegen as replacements.

And Mignolet says he has taken great confidence from Klopp's public backing.

"Ever since I arrived here we have been going in the right direction," the former Sunderland goalkeeper told the Liverpool's official website.

"Also, with the new manager, who has praised me a lot – not only speaking with me personally but also to the outside world – I feel a lot of confidence from him.

"Especially for the goalkeeper, you have to feel the confidence of every staff member and the team.

"Because in that position you need people behind you and need them to believe in you 100 per cent, so you can do the best job you possibly can.

"I feel that confidence from everybody at Melwood. I have worked a lot with John Achterberg, the goalkeeping coach, and as I said, the list we made when I arrived here was very big.

"We looked at things we could improve and that will stay the same. Every day in training, we will try to work to keep improving the things we can do and maintaining the levels we’re at.

"He will do his work again from tomorrow onwards, like I will do – put our heads down, keep both feet on the ground and work as hard as we can."

Mignolet has made 122 appearances for Liverpool since arriving from Sunderland in 2013.