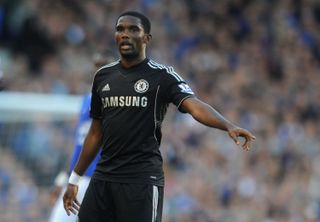 The Cameroon international - who signed for Chelsea on a free transfer last month - made his first appearance for the club on Saturday, in their 1-0 loss to Everton at Goodison Park.

The former Barcelona striker was guilty of missing several chances in the loss, particularly an early header, but despite drawing a blank on his debut, Mikel has backed his new team-mate to play a crucial role this season.

"Samuel is a great player, a fantastic player," Mikel said.

"You could see the way he played, he created some fantastic chances. That is why the manager brought him in. Obviously he has a lot of trust and belief in him."

Mikel has also urged that Eto'o be given time to adapt to English football and is confident he will prove his worth for manager Jose Mourinho.

"The English league is very difficult to adapt to and this was the first game for him and he has done pretty well," he said.

"Chelsea was my first real professional club and it took me six months to a year to adapt, but I think someone like Eto'o, who is well experienced and has played in so many leagues, won't take very long.

"I think he looked a bit sharp so it won't take him long to get back into his fitness. He is a world-class player, a fantastic guy. We just have to keep playing with him and helping him to adapt to the Premier League.

"He tries to give his experience so we have to keep working with him, keep playing with him and trying to help him to fit in."