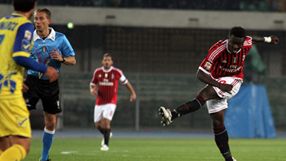 Ghana forward Sulley Muntari rifled in a 30-metre shot early in the game as Milan bounced back from their shock 2-1 home defeat by Fiorentina on Saturday and their Champions League exit at the hands of Barcelona a week ago.

Tough-tackling midfielder Gennaro Gattuso started his first match since September, when he suffered a serious eye condition which led to speculation that he may have to end his career.

Milan showed their gritty side as they ground out a win on a wet night in Verona, their attitude symbolised by defender Mario Yepes who insisted on continuing with an injury which left his nose splattered in blood in stoppage time.

The Fiorentina defeat had cost Milan the Serie A lead but Tuesday's win took the Serie A champions back to the top, at least until Juventus host Lazio on Wednesday.

"The criticism was excessive after our defeat," coach Massimiliano Allegri said in the post-match television interview.

"Even though we were still alive and kicking in the title race, they were already preparing our funeral.

"We knew that if we did not win here we could have been definitively out of the race for the scudetto. We haven't played well but this showed that this squad is not just about technique."

Milan had Massimo Ambrosini, Alberto Aquilani and Daniele Bonera suspended while Urby Emanuelson and Philippe Mexes were only considered fit for the bench.

Fortunately, they got the perfect start when Muntari scored with a characteristic long-range drive.

Both teams had chances before half-time, Robinho coming the closest for Milan when his shot was turned away for a corner by Stefano Sorrentino. Alberto Paloschi had the ball in the net for Chievo but it was disallowed for offside.

Milan had the game more under control in the second half as leading scorer Zlatan Ibrahimovic finally began to see some of the ball, however it was anything but a vintage performance.