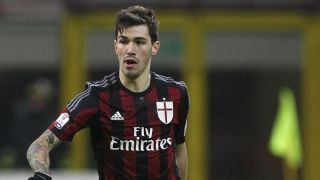 AC Milan insist Alessio Romagnoli is not for sale, despite receiving a "significant offer" for the player from Chelsea.

The Premier League club have been linked with a number of defenders in this transfer window, but have now seen two bids for Romagnoli rejected, the latest of which was reportedly in the region of €35million plus bonuses.

Milan are eager to retain the services of the Italy Under-21 international as they look to build under new coach Vincenzo Montella.

"The player is not for sale, therefore this negotiation will not continue," read a statement on Milan's official website.

"The club wants to thank Chelsea FC, with whom we will continue to have a great working relationship."

has received a significant offer for its player Alessio Romagnoli from , but the player is not for sale.August 25, 2016

The seven-time European champions revealed earlier this week that a bid in excess of €25m had been turned down.

Romagnoli joined Milan at the start of last season, from Roma, and made 40 appearances in his first campaign with the club, scoring once.

He also started their Serie A opener against Torino on Sunday as Milan ran out 3-2 winners.