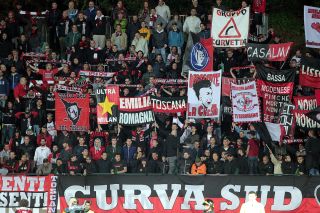 Massimiliano Allegri's men had been hit with the sanction for the game on October 19 following chants from their supporters in the 3-2 defeat at Juventus last Sunday that allegedly discriminated against southern Italy.

Territorial discrimination among fans has been treated in the same way as racism in the Italian game, with both offences seeing clubs forced to play behind closed doors.

The initial decision to ban Milan fans for the visit of Udinese had angered vice-president Adriano Galliani, who called for a change in the rules after learning of the Italian Football Federation's (FIGC) ruling, with Milan subsequently opting to appeal the suspension and the €50,000 fine levied against them.

And they have now been granted a stay over the decision after the FIGC opted to consider the evidence further.

A statement from the FIGC read: "The Federal Court of Justice has suspended the sanctions on an appeal filed by Milan against the closure of the Stadio Giuseppe Meazza (San Siro) for one match and a fine of €50,000.

"The Federal Court of Justice asks the Federal Prosecutors Office to (now) gather every possible piece of evidence."