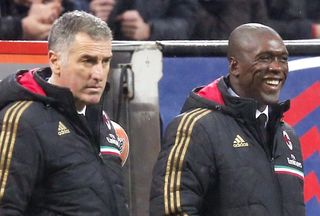 The San Siro club have been in dismal form in Serie A this season - Milan are 11th with 25 points from 20 games - and recently appointed Clarence Seedorf as a replacement for the ousted Massimiliano Allegri.

With the club's chances of salvaging a continental berth from their league campaign looking slim, Tassotti believes the Coppa Italia, in which Milan face a quarter-final clash with Udinese on Wednesday, now takes on a greater importance.

"The Coppa Italia seems the best route to qualify for Europe next season," he said. "We'll play with a side to win. Every player that takes to the pitch will have to have keep this in mind.

"Knockout matches are always dangerous. We're favourites because of home advantage and Udinese will play with less pressure on them.

"Even though they're struggling, they're a good side, they've got good players and against us in the Coppa Italia they've got a good record. We want to progress."

On the subject of new head coach Seedorf, Tassotti declared that the Dutchman had settled into the role quickly.

"I'm getting on well with Clarence," he continued. "There was a moment of confusion after the dismissal of Allegri, but that's normal.

"I worked for three and a half years with other staff members and I'm committed to the club.

"I've known Clarence for years. He's very attentive to every minor detail, he’s aware of everything, he's completely thrown himself into the job.

"I think he was preparing for this job for a while and it's clear that he was working towards this."