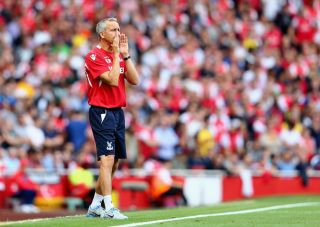 Millen took charge of the club following the surprise departure of Tony Pulis last week and oversaw a 2-1 defeat against Arsenal on the opening day of the Premier League season.

The club have been rocked further with Thursday's resignation of sporting director Iain Moody following allegations of misconduct from his former employers Cardiff City.

In the wake of reports surrounding derogatory texts Millen and ex-Cardiff boss Malky Mackay - who had been expected to take the Palace job - are alleged to have sent, Millen hopes to end a difficult week for the club with a win against West Ham on Saturday.

The former Bristol City manager also feels victory over Sam Allardyce's men would serve to bolster his hopes of landing the job permanently.

"Each day something's unfolded, stories have come out. It's been difficult," said Millen of the off-field controversies.

"We've come in today and trained, had a brief chat about staying focused and the lads have been fine.

"If we can get a result and three points on Saturday, my case becomes stronger.

"The chairman has said all along he'll see what's available in terms of a manager. He knows what I can do. He doesn't feel like he has to rush and make sure it's the right person.

"I've been encouraged by the response of the players and the fans have been fantastic.

"If you get results, the chairman might suddenly decide I tick enough boxes to take this club forward."

Pulis' exit is believed to be linked with a lack of movement on transfer targets - something Millen acknowledges remains an issue as the end of the transfer window approaches.

However, the 47-year-old expects more new recruits to arrive before September 1.

"That confidence is there, I think we've got a stronger group of players now than we had last year but we don't have enough competition for places," he added.

"We're in an ideal shape, just without a manager.

"We speak about players all the time, with the scouting staff. We need to look at what we need to suit our style of play and the group of players we've got.

"If we get some names then we can say to whoever takes over, this is what we think we need."