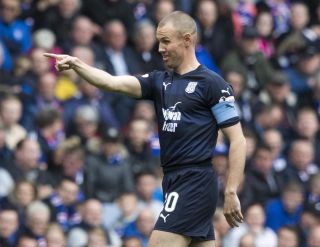 Kenny Miller’s first-half goal was enough to earn relegated Dundee their first win in three months in a tame end-of-season affair at Livingston.

Jim McIntyre’s side had lost 10 matches in a row prior to this 1-0 result at the Tony Macaroni Arena, where they last tasted victory back in February.

Livingston, with nothing to play for, came closest to scoring through Stevie Lawless and Dolly Menga in a match that lacked any real competitive edge.

Dundee made three switches for their last Premiership away match for at least 15 months. John O’Sullivan, James Horsfield and Scott Wright all dropped to the bench, with McIntyre instead handing starting places to Miller, Paul McGowan and Nathan Ralph.

Miller had started this season as Livingston player-manager but left that role after just seven weeks. He marked his return with the first goal of the game after 11 minutes, fastening on to Andrew Nelson’s pass and steering it under Liam Kelly.

The striker appeared to injure his arm after colliding with the goalkeeper but was able to continue after treatment.

The goal was Miller’s first since December and put him into the record books as Dundee’s oldest ever scorer, just seven months shy of his 40th birthday.

It was a typical end-of-season affair with nothing at stake for either side but there were still sporadic chances at both ends.

Dolly Menga should have brought Livingston level but completely miscued his header from Stevie Lawless’ cross, while Cammy Kerr came close to putting Dundee two ahead but Kelly was able to block his shot from close range.

Menga then mis-hit a cross from wide on the left only to see it almost drift in under the crossbar, prompting goalkeeper Seny Dieng to desperately claw it away. At the other end, Miller teed up Nelson, whose low drive was easily gathered by the goalkeeper.

The second half was largely a non-event beyond a few half-chances and both teams making a raft of substitutions.

Dundee substitute Scott Wright should have made the outcome safe but shot straight at Kelly, before Lawless dragged an effort wide for Livingston in a rare burst of scoring chances.