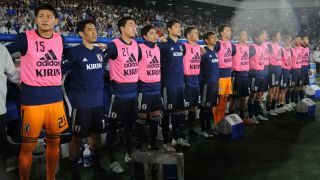 Japan's preparations for the tournament have been far from perfect, as they sacked coach Vahid Halilhodzic in April despite the Bosnian presiding over their successful qualification campaign – a lack of "communication and trust" cited as the Japanese Football Association's (JFA) reason.

Nishino was announced as his replacement and took charge of his first match on Wednesday, a 2-0 home loss in their World Cup send-off match against Ghana, a side who failed to qualify.

Nishino has made his final selection in the wake of that defeat, with Misao, Ideguchi and Asano left at home.

Misao's omission is the least surprising given he failed to make an appearance in qualifying, while Leeds United-owned Ideguchi featured three times and Asano – who is on loan at Stuttgart from Arsenal – played six qualifiers.

Japan were drawn in Group H with Colombia, Poland and Senegal at the World Cup and will likely be relying on the performances of Shinji Kagawa, Keisuke Honda, Shinji Okazaki and Yoshinori Muto if they are to make an impact.

Their first game is against Colombia on June 19.