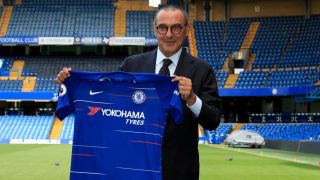 Maurizio Sarri insists "mistakes" in his past do not accurately represent his character and will not overshadow his tenure at Chelsea.

The new Blues boss faced the media for the first time on Wednesday and answered questions over a number of controversies during his coaching career in Italy.

Sarri, 59, was labelled a "racist" and accused of being a homophobe by then-Inter boss Roberto Mancini following a heated exchange in 2016.

Further criticism followed earlier this year when he insulted a female journalist, but the former Perugia and Empoli coach claims past comments are not indicative of his views.

"These were mistakes for sure. I think they do not very well define me, either as homophobic or racist," Sarri said.

"I am a very open person. I do not have these kinds of problems. I hope I will be able to show this when I am working here and living here.

"These mistakes were made, yes, and when someone makes a mistake they must apologise. To have a professional and ethical attitude is very important.

"I hope you will get to know me better and forget about this."

Left "heartbroken" by an acrimonious departure from Napoli, Sarri has resolved to introduce a sense of fun at Stamford Bridge, where a tense atmosphere developed under Antonio Conte last term.

The Italian hopes to do that by implementing a playing style he described as closer to Pep Guardiola's approach than that of Jose Mourinho.

"[Mourinho] was won many things repeatedly and in different clubs so I think his track record does not need any description. We are talking about a world level coach," Sarri said.

"I esteem Guardiola and also other managers. My playing style is closer to Guardiola but I really appreciate both in the same way.

"My goal is to have fun and if possible be competitive in all competitions until the very end."