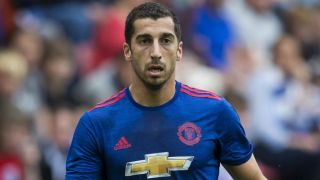 Manchester United signing Henrikh Mkhitaryan has revealed how he is driven by the premature loss of his father.

A former Armenia international, Hamlet Mkhitaryan died of a brain tumour in 1996, aged 33, and with his son Henrikh just seven.

Henrikh joined United from Borussia Dortmund in July in a deal worth a reported £26million and is expected to star for Jose Mourinho's men.

The 27-year-old opened up about how the death of his dad provides him with additional motivation.

"He was my drive, so he was my motivation because when I was young he was playing football professionally and I was always dreaming to go with him to the training ground," Mkhitaryan said.

"It was my dream to continue his work and to also be a football player.

"He was 33 years old, I was seven years old at the time so, yes, it is a pity but that's life. The life continues and I hope he is proud looking at me from the sky so I try to do everything to make him proud."

Hamlet Mkhitaryan, a striker, played for two clubs in his homeland before moving to France, while he made two appearances for the national team.

Henrikh said he had watched footage of his father, whose presence he missed growing up.

"I would watch footage of him playing many times when I was young but football has changed a lot so if I watch now it’s just to remember the way he played," he said.

"It's sad because I think he could have helped me with his words and his support. I think on one side, yes [I grew up faster] but on the other, no, because it is very difficult when you grow up without a father because in the family you don't have a real man who can give you direction, discipline."