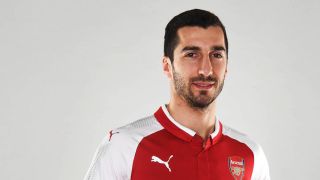 Henrikh Mkhitaryan wants to "create history" after completing a "dream" move to Arsenal in a swap deal that sent Alexis Sanchez to Manchester United.

Mkhitaryan failed to establish himself at United following a reported £26.3million move from Borussia Dortmund in 2016 and has been traded for Chile international Sanchez, whose contract at the Emirates Stadium was set to expire at the end of the season.

The Armenia international expressed his satisfaction at completing the switch to north London, where he has signed a "long-term contract".

"I'm very happy that we could finish this deal and I'm very happy to be here," Mkhitaryan told Arsenal's official website following Monday's confirmation of the blockbuster switch.

"It's a dream come true because I've always dreamed of playing for Arsenal. Now that I'm here, I'll do my best for this club to create history.

"Of course I was in love with the game of Thierry Henry. I loved the way he played - and maybe that was the reason to support Arsenal."

Arsenal manager Arsene Wenger is delighted to have captured Mkhitaryan and hailed the player's range of qualities.

"He creates chances, he defends well, he can absorb distances and he's very committed as well. I must say he's a player who has all the attributes."

Pierre-Emerick Aubameyang could be the next player to arrive at Arsenal. Borussia Dortmund claimed the Gunners had made a formal bid for the unsettled striker at the weekend, though Wenger has since denied any movement on a potential transfer.