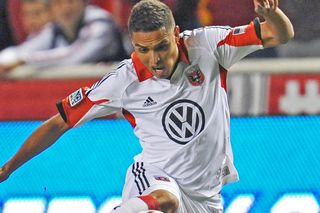 The Eastern Conference's second-placed team closed the gap on leaders Sporting Kansas City to two points with the win, set up by Luis Silva's brace.

Silva made it 1-0 in the 12th minute after a sloppy turnover of possession in the middle of the park by the Rapids.

He cut inside a marker before neatly finishing into the top corner, giving Rapids goalkeeper Clinton Irwin no chance.

The Rapids would eventually equalise seven minutes into the second half, and in some style.

Dillon Serna got on the end of a headed clearance and lashed a stunning 35-yard volley over DC keeper Bill Hamid.

Fabian Espindola went close to matching Serna's fine goal, but his delicate 20-yard chip from an angle bounced off the crossbar as United had to wait to go ahead again.

Chris Rolfe made it 3-1 when he put away Taylor Kemp's cutback in the 81st minute and Espindola added another with a powerful finish.

Deshorn Brown scored a consolation goal for the Rapids, who slumped to their fourth straight loss, with a close-range header in additional time.