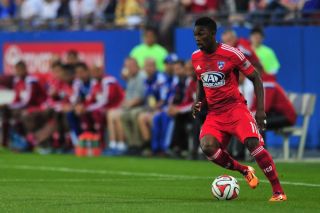 Dallas striker Blas Perez was sent off just before half-time for a second bookable offence, earning his second yellow card when he theatrically threw himself to the ground, following a shove from RSL defender Christopher Schuler.

Schuler received a yellow card for his troubles, while the home side were suddenly down a player heading into the interval.

But after the break, goals to JeVaughn Watson and in-form Fabian Castillo saw Dallas win their fourth straight MLS match, despite Olmes Garcia's late goal for the visitors.

The Texas-based side joined Seattle Sounders and RSL on 42 points in the West, leapfrogging the latter into second on goal difference, while they trail the conference-leading Sounders on games won.

The first half was notable for Perez's red card with social media erupting in discussion over whether the Panamanian forward had been harshly treated after Schuler clearly pushed him in the chest.

But the referee had no hesitation booking Perez for simulation as the 33-year-old almost produced a back flip, after Schuler made contact as the Dallas forward got up following an aerial clash between the pair.

Perez had earlier gone into the referee's notebook for a scuffle before a Dallas corner.

But RSL were unable to capitalise in the second half with Watson opening the scoring for the hosts in the 50th minute.

Michel's corner looped over a group at the near post and the ball struck Watson on the chest as he ran towards goal, bouncing off the Jamaican and into the net.

Castillo doubled Dallas' lead in the 74th minute, collecting a loose ball in RSL's defensive half and bursting into the box and firing a shot across visiting goalkeeper Nick Rimando and inside the far post.

The goal was Castillo's fifth in Dallas' past four games in all competitions with the Colombian having struck twice in his team's 5-0 demolition of San Jose Earthquakes last week.

The visitors got on the scoresheet in second-half stoppage time thanks to a bicycle kick from Garcia but it mattered little.