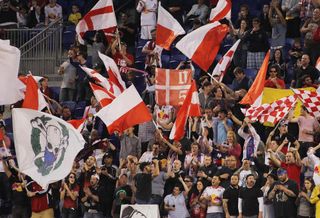 After going behind early in the second half to a blistering Sporting counter-attack, finished off by Dominic Dwyer, New York recovered late at Red Bull Arena with Bradley Wright-Phillips scoring twice, including a header in the 90th minute, to secure victory in the knockout play-off.

Wright-Phillips converted from a Thierry Henry cut-back in the 77th minute and then broke Kansas City's hearts in the final minute of regulation time, nodding Ambroise Oyongo's cross into the net when he was left completely unmarked on the edge of the six-yard box.

It was a demoralising way for Sporting's defence of their 2013 championship to end, while it continued a bad week for Kansas City sports fans after the Royals lost the MLB World Series to the San Francisco Giants on Wednesday.

For the Red Bulls, Wright-Phillips' late heroics ensured the New York club avoided elimination in their first play-off challenge for the third year in a row.

The past two years, New York have finished in the top four of the MLS' Eastern Conference but failed to progress beyond their two-legged semi-final.

Thursday's victory sees them reach the conference semi-finals again and Mike Petke's side will be hoping they can use their momentum to overcome Eastern Conference champions DC United.

New York will host DC in the first leg on Sunday before travelling to the United States' capital on November 8.

The Red Bulls had the better of the goal-scoring opportunities throughout the match with Tim Cahill and Wright-Phillips wasting big chances before half-time but it was the visitors who struck first, Dwyer converting  in the 53rd minute after Benny Feilhaber won possession in the centre circle and burst forward.

Dwyer's goal - his 23rd of the campaign - seemed to inspire the home side, however, with Henry forcing Kansas City goalkeeper Eric Kronberg into a fine save soon after.

Red Bulls substitute Peguy Luyindula inspired the hosts' comeback, releasing Henry down the left to set up Wright-Phillips for the equaliser, while the French midfielder picked out Oyongo's run from right-back that led to the winning goal.

Wright-Phillips' brace saw the Englishman reach 29 goals for the campaign - the 29-year-old finished ahead of Dwyer in the regular season to win the MLS golden boot, levelling the record of 27 for the most goals in a season.