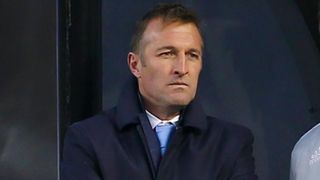 The new franchise is only five games old, and has registered one win and two draws to sit in seventh spot in the Eastern Conference, but Kreis feels something is missing.

"There's a dynamic in the team about who is going to step forward and be the guy who is not so nice," Kreis said.

"We have a lot of quality players, and we've got all quality people. In some ways, maybe we're at the moment where we're all a little bit too nice."

Union sit below City on goal difference in eighth spot after beating them 2-1 in their reverse fixture on Saturday - with the return match, oddly, coming just five days later.

Philadelphia have conceded the most goals of any MLS side this term - 10 - and will be wary of David Villa once more, with the Spanish striker scoring on Saturday - his second goal in three games.

On Friday, City's neighbours New York Red Bulls host San Jose Earthquakes - with Jesse Marsch's Red Bulls having the chance to go top of the Eastern Conference with a win.

DC United are two clear of Red Bulls, but do not play until Saturday, when they host Houston Dynamo.

Also on Saturday, Columbus Crew will look to break a run of two draws when they host Orlando City, while the Western Conference's second-placed outfit Dallas welcome a struggling Toronto, who have lost three in succession.

Galaxy won for the first time in five matches last time out, while Sporting KC are unbeaten in four.