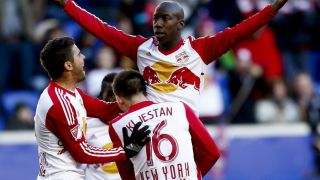 Kljestan and Co. top the Eastern Conference on goal difference ahead of DC United and MLS Cup finalists New England Revolution after opening the season with three wins and two draws - matching their longest unbeaten start to a campaign set in 2007.

The Red Bulls - 2-0 winners over San Jose Earthquakes last week - have a game in hand on United, while the New York franchise have played two matches less than the Revolution heading into Sunday's hosting of reigning champions Los Angeles Galaxy at Red Bull Arena.

But Kljestan and his team-mates are taking everything in their stride, knowing it is still so early in the season.

"The thing for us is not to get ahead of ourselves," said the 29-year-old, who swapped Belgian giants Anderlecht for the Red Bulls in January.

"It's still too early to say, 'Oh yeah, we're on top of the East,' and all that. Like I said, we're going to play with that chip on our shoulder because we felt that a lot of people doubted us from the beginning.

"Now we have a lot of respect because we're the last unbeaten team and things like that, but we're still going to have that chip on our shoulders."

United and the Revolution headline the four Saturday fixtures.

Ben Olsen's United - unbeaten in four outings after their 1-1 draw against Houston Dynamo - travel to Western Conference leaders Vancouver Whitecaps, who top the standings with 16 points from eight matches so far.

The Revolution, who came from behind to beat Philadelphia Union 2-1, welcome Real Salt Lake to Gillette Stadium.

RSL will be without first-choice centre-back Chris Schuler for their trip to Foxborough after the 27-year-old underwent surgery to repair a torn medial meniscus in his right knee.

Out-of-form New York City will be out to arrest a five-match winless streak when they travel to East rivals Chicago Fire on Friday.

Orlando City and Seattle Sounders complete the round on Sunday, with respective home fixtures against Toronto FC and Portland Timbers.