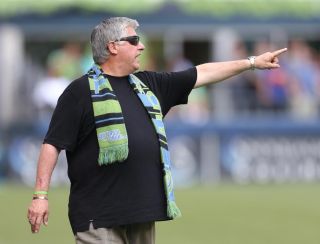 The Sounders were arguably the happier of the two teams thanks to Osvaldo Alonso's equaliser and away goal in Frisco, Texas.

Sigi Schmid's Sounders now return to familiar surroundings with a simple equation - win to secure a berth in the Western Conference finals.

A goalless draw would be enough for the Sounders, while a 1-1 stalemate would send the tie into extra-time, which sets the tone for an open and attacking spectacle in Seattle.

"We still need to win at home. We definitely don't want to get a 2-2 tie at home, but having an away goal certainly helps," Schmid said after Sunday's draw.

"It puts a little more pressure on them, to a certain extent. But I know we'll play better being at home, and playing in front of our crowd is a good thing for us."

The Sounders will play either Los Angeles Galaxy or Real Salt Lake next up.

It is a different story for Eastern Conference high flyers DC United, who were completely outplayed by the Red Bulls last week.

Mike Petke's decision to drop Australia international Tim Cahill for Peguy Luyindula proved to be a masterstroke, with the veteran Frenchman a constant threat throughout as the New York franchise won 2-0 at Red Bull Arena.

MLS leading goalscorer Bradley Wright-Phillips scored in the first half, before Luyindula capped a final display with a goal of his own in the 73rd minute.

United, who finished top in the East by four points, face an uphill task to salvage their season but coach Ben Olsen has not given up hope upon Saturday's return leg in Washington.

"One thing I do believe in is that this team responds to adversity," Olsen told MLSsoccer.com.

"There's real character with these guys and I have no doubt that we will be a better side [than we were last weekend.] Like I said before, we'll make this thing very interesting."

New England Revolution are likely to be the opponents waiting in the conference finals after they defeated Columbus Crew 4-2 on the road last week.

Charlie Davies was the star of showing - scoring twice - in a match that saw 32 fouls called and coach Jay Heaps is expecting another physical encounter at Gillette Stadium.

"I think both teams will bring that same kind of physicality," said Heaps. "I don't think any team is going to back down."