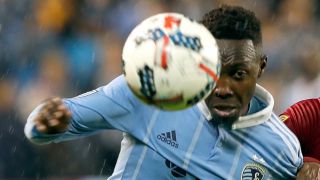 Winger Gerso scored a 13-minute treble to inspire Sporting KC's 3-0 victory at home to the Sounders on Wednesday.

After a scoreless first half, Gerso broke the game wide open with three quick-fire goals at Children's Mercy Park, starting in the 56th minute.

Gerso fired the ball low and hard into the bottom corner of the net, with some help from a slight deflection.

He was at it again two minutes later – initially hitting the post before converting his own rebound after the ball fortuitously fell to his feet.

Gerso completed his hat-trick in the 69th minute, when he tucked away Graham Zusi's cutback.

With the result, Sporting KC leapfrogged Dynamo into top spot in the Western Conference.

The Dynamo suffered a 2-0 defeat against in-form Philadelphia, though Houston have a game in hand in the west.