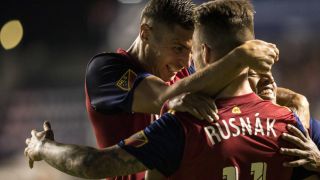 Ibrahimovic took his tally to 499 in a draw with rivals Los Angeles FC last time out but the former Manchester United striker remains stranded on that number following Saturday's capitulation.

The Galaxy actually opened the scoring after less than a minute when Jonathan dos Santos volleyed powerfully past RSL goalkeeper Nick Rimando from Ashley Cole's cross.

It was one-way traffic from that point as RSL scored four unanswered goals – Damir Kreilach's brace and goals from Albert Rusnak and Jefferson Savarino putting the hosts 4-1 ahead by the hour-mark.

Romain Alessandrini pulled a goal back in the 63rd minute but it was a mere consolation as Rusnak netted his second and Kreilach completed his hat-trick with 19 minutes remaining.

The loss condemned the Galaxy to six games without a win as the LA franchise dropped three points adrift of the play-off places in the Western Conference, while RSL stayed fourth and four points inside the top six.

Former Arsenal and Manchester City full-back Bacary Sagna was on target in Montreal's 3-0 victory over the Red Bulls.