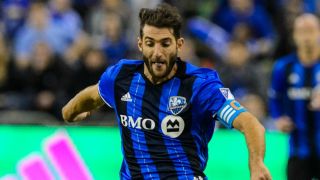 Montreal Impact came from two goals behind to seal a stunning 3-2 win over New England Revolution in Saturday's MLS action.

A first-half double from Kei Kamara had Revolution cruising at Stade Saputo before Michael Salazar pulled a goal back just before the break.

Belize international Salazar began where he left off with a goal three minutes into the second half, before Revolution goalkeeper Brad Knighton chopped down Ignacio Piatti in the box.

Piatti stood up and converted the resulting spot-kick - his 10th strike of the season - which proved to be the winner for Montreal in a five-goal thriller.

The win sees Impact move up to second in the Eastern Conference on 24 points, two behind leaders Philadelphia Union who suffered a heartbreaking 1-0 loss to Houston Dynamo.

Union goalkeeper Andre Blake was in stunning form for the visitors, making several crucial saves to keep Dynamo out throughout the contest.

However, the East leaders were reduced to 10 men late on when Joshua Yaro received a second yellow, before Cristian Maidana curled in a free-kick to win the game in the 95th minute.

In the day's other match, Toronto FC and Seattle Sounders played out a 1-1 draw at BMO Field.

Promising 20-year-old Jordan Hamilton put Toronto ahead on the hour-mark after Sebastian Giovinco's shot was saved, but their lead lasted less than 60 seconds.

Jordan Morris struck right back for the away side, sealing a deserved point with a well-taken goal.