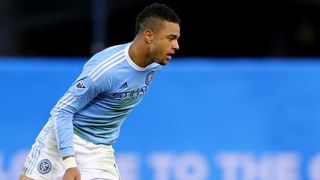 The hosts looked set for defeat at Yankee Stadium after Maximiliano Urruti and Michael Barrios turned the game in Dallas' favour after Thomas McNamara had initially put New York City ahead eight minutes in.

New York City are a point behind Toronto and a point ahead of third-placed New York Red Bulls, who visit the Eastern Conference leaders on Sunday.

DC United needed a last-gasp equaliser from Bobby Boswell to draw 2-2 with strugglers Chicago Fire and stay within two points of sixth-placed New England in the Eastern Conference.

Portland Timbers overcame Philadelphia Union 2-1 in a match between two teams firmly in the hunt for the MLS Cup playoffs, Joshua Yaro seeing red for Philadelphia late on.

Colorado Rapids handed LA Galaxy - who face Sporting Kansas City on Sunday - a chance to leapfrog them into second place in the Western Conference as they were held to a 0-0 draw by San Jose Earthquakes.