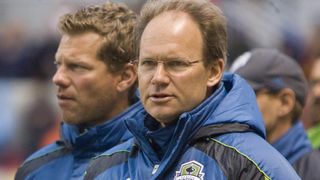 The Seattle Sounders overcame Houston Dynamo in MLS, while a nine-man Orlando City earned a draw on Sunday.

A 69th-minute header from Will Bruin proved to be enough for Brian Schmetzer's Sounders to record a 1-0 win over Dynamo at CenturyLink Field.

Bruin got on the end of a Cristian Roldan cross from the right to head in at the back post against his former club.

The result lifted defending champions Seattle into sixth in the Western Conference, while Houston missed a chance to return to the top and are two points behind leaders Sporting Kansas City.

Orlando held on for a 0-0 draw against Chicago Fire despite being reduced to nine men.

Just 26 minutes into his first game of the season, Rafael Ramos saw red, although the decision appeared harsh for a clumsy foul.

Former AC Milan midfielder Antonio Nocerino was also sent off, shown a red card for a studs-up challenge in the 66th minute.

But Chicago – second in the Eastern Conference and a point clear of Orlando – were unable to find a winner, hitting the woodwork twice in additional time.