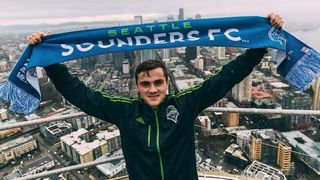 There was plenty of time for Seattle Sounders fans to get extremely nervous during the six weeks between Jordan Morris winning an NCAA title with Stanford and being unveiled as the most highly anticipated rookie signing in MLS history. What seemed like a foregone conclusion that Morris would join the Sounders slowly morphed into a wave of uncertainty as steady reports of his trial at Werder Bremen left it looking unlikely that he could say no to a chance to play in Europe.

What wasn't taken into account was the fact Morris had been thinking about playing for the Sounders for years, and that he probably would have signed with Seattle weeks earlier if U.S. national team coach Jurgen Klinsmann didn't present him with the opportunity to train with, and trial for, Werder Bremen.

As nervous as the Bremen trial may have made Sounders fans, Seattle was never really that close to losing the Stanford star. Those close to Morris had long believed he would eventually choose the Sounders, and Seattle coach Sigi Schmid kept the faith even when reports out of Germany might have given him reason to believe otherwise. Speaking to Goal USA at the 2016 MLS draft on January 15, Schmid sounded very confident about Morris sticking with the decision he always felt strongest about, which was playing for his hometown team.

Morris joining the Sounders took on added meaning for a variety of reasons, most of which had little to do with Morris and more to do with a league still fighting for respect, and American soccer fans still hoping for an American player to really become a breakout star overseas. Yes, there have been many Americans who have fashioned impressive careers in Europe, but we have yet to see a transcendent figure who has really earned the label of superstar.

That void makes any promising talent become the subject of unrealistic expectations, and the reality is there is a segment of the American soccer fan population that truly believes Morris took the easy road by signing with the Sounders rather than Werder Bremen. In some ways it is easier. MLS is not as good a league as the German Bundesliga, and the competition for playing time with Seattle won't be what it might have been for Werder Bremen. That being said, easier doesn't have to mean easy, and easier doesn't have to mean wrong.

MLS is not the Bundesliga, but it is a league that is much better equipped to develop a talent like Morris now than it was 10 years, or even five years ago. Morris signing with the Sounders now gives MLS the chance to prove that, which might explain why even MLS commissioner Don Garber took to making public statements about the importance of having Morris sign with the Sounders.

Morris' decision wasn't about the money either. it is unclear what Werder Bremen's offer was to Morris, but sources have told Goal USA that Morris could have earned double what the Sounders have ultimately agreed to pay him (in the $250,000 range for the first year of his contract), though that Bremen contract could have changed dramatically if the club were to be relegated (with a source telling Goal USA the difference in salary could have all but disappeared with a Bremen relegation).

To be clear, there is nothing to suggest Morris passed on Werder Bremen because the club is currently in the Bundesliga relegation zone, but the club's shaky footing couldn't have worked in its favor as Morris pondered his options. Would it have been realistic to think that a relegation-threatened manager was going to play the first-year pro ahead of a veteran like Claudio Pizarro, or a productive forward like Anthony Ujah?

Bremen may have seen Morris as an inexpensive insurance policy in place of injured U.S. national team forward Aron Johannsson, who has yet to fully recover from November hip surgery, but Morris would have started his pro career by jumping into the middle of the season with a club desperately fighting to avoid relegation safety (a fight that started well with a victory against Schalke this past weekend).

As much as the fight for playing time would likely have been more difficult at Werder Bremen, Morris isn't exactly going to just walk into the Sounders starting lineup either. Clint Dempsey and Obafemi Martins form one of the best strike partnerships in MLS, and Morris will have to work hard to force his way onto the field in Seattle. Schmid told Goal USA that he sees Morris being able to contribute as a rookie, and that finding a place for him won't be difficult.

"With Jordan you have a lot of different options, and with his talent you will find a way to make it work," Schmid told Goal USA. "Jordan will have some good people to learn from when you talk about people like Clint and Oba, and really the whole environment will be a good one to help him make that transition into his pro career."

Morris may have passed on the chance of playing in the Bundesliga pressure cooker that Werder Bremen would have provided, but he will have his own challenges in playing for a Seattle side desperate for the club's first MLS Cup. He will take the field in March carrying the kind of expectations we haven't seen a rookie face since Freddy Adu back in 2004, and the questions and second-guessing will start to fly if Morris doesn't hit the ground running.

The expectations Morris will face in Seattle are part of the reason his decision was a good one. If Morris were taking an MLS deal to join a terrible team where he would be expected to walk in and carry the squad on his back, then you could have made a much better argument that passing up Werder Bremen might have been foolish.

Morris isn't joining one of the weakest teams in MLS — he is joining a perennial powerhouse that is poised to make a championship run in 2016. He will be expected to contribute, but won't be expected to carry the load on his own. He will have standouts around him who can help make him better, and also help educate him on life as a pro.

As for Europe's top flight? That chance can wait, and as the Sounders showed with the sale of DeAndre Yedlin to Tottenham, they aren't a team that will stand in the way of a good opportunity overseas. If Morris thrives in Seattle, other chances to play in a top league will emerge. If that does happen, then he should be much better prepared to make the jump to Europe than he might have been this winter.

If nothing else, his Werder Bremen experience should give him an idea of what will be awaiting him if and when he finally decides to make that move to a top European league. It will serve Morris better in the long run to have experienced the Werder Bremen trial than to not have ever had the chance.

Now it is up to the Sounders to help continue develop Morris as a player, and it will be up to Morris to show that all the hype, and the nerve-wracking wait for his decision, was worth it.