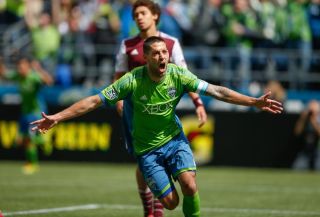 A second-half brace from captain and USA international Clint Dempsey inspired the Sounders to a 4-1 victory against the Colorado Rapids at CenturyLink Field on Saturday.

The comprehensive win elevated Seattle (16 points) to the summit on goal difference after eight games following Dallas' (16 points) 4-1 capitulation at the hands of DC United.

Seattle had won back-to-back games prior to Saturday's home clash and they put themselves on track for more success thanks to Lamar Neagle's opener on the stroke of half-time.

Sigi Schmid's men doubled their lead just two minutes after the break courtesy of Dempsey, who was on hand to rebound Marco Pappa's effort.

The former Fulham attacker netted his second of the game five minutes later when he looped his headed effort over Colorado goalkeeper Clint Irwin.

Dillon Serna pulled a goal back for the visitors on 62 minutes but Seattle restored their three-goal buffer 15 minutes from time as Obafemi Martins slotted the ball inside the far post.

Dallas slipped to second in the West after they faded away in the second half at Robert F Kennedy Memorial Stadium.

Mauro Diaz had given the visiting team a 13th-minute lead but Fabian Espindola's late first-half goal ensured scores were level at the break.

It all went downhill for Dallas after the interval, with Robert Boswell, Sean Franklin and Espindola all scoring in the space of nine minutes to extend DC United's unbeaten streak to five games.

In other results, Sporting Kansas City missed the chance to go top in the Eastern Conference after they were beaten 2-0 by the New England Revolution.

Leaders Columbus Crew were held to a 1-1 draw by rivals New York Red Bulls, paving the way for Sporting KC to go top.

But two goals in the final minutes from Teal Bunbury and Lee Nguyen ensured Columbus (12 points) stayed top, one point clear of Sporting KC (11 points), who finished the match with 10 men.

Elsewhere, Felipe Martins found the back of the net as Montreal Impact defeated Philadelphia Union 1-0 for their first win of the season.