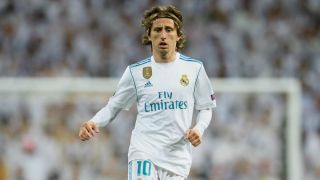 Luka Modric would be an important signing for Inter, said head coach Luciano Spalletti as the Serie A club continue to be linked with the Real Madrid star.

Modric has helped Madrid to win four Champions League titles in the past five years but reports have suggested he could follow Cristiano Ronaldo to Italy.

Madrid president Florentino Perez has said Modric will not be allowed to leave the Santiago Bernabeu unless his €750million release clause is met.

But Spalletti suggested Inter are working on a deal for the 32-year-old, who won the Golden Ball after inspiring Croatia to the World Cup final.

"The club has shown they work in a coherent and serious fashion," Spalletti told reporters.

"They are trying to put everything in place that we consider to be right.

"It's certain a player of that calibre would be important for anyone, let alone for us.

"I continue to dream along with the fans, but we have everything needed to handle anything that happens."

6 - Luka Modrić assisted for six Cristiano Ronaldo goals last season in all competitions, the most for one Real Madrid player to another. Italy? August 4, 2018

Spalletti was speaking after Inter ended a run of four pre-season games without a win by downing Lyon in Lecce on Saturday.

Lautaro Martinez scored the only goal in the International Champions Cup clash and the Inter coach hinted at how the striker could fit into the team alongside fellow new signing Radja Nainggolan and captain Mauro Icardi.

"He can play all the midfield roles with great quality and great strength," Spalletti said of Nainggolan, who did not face Lyon.

"You can see in a few games that Icardi is up front with Lautaro as a number 10 and Radja in the middle.