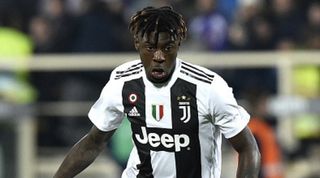 The Daily Mail suggests that the Goodison Park outfit face demands of £31 million in their pursuit of 19-year-old Kean.

Juve want the Italy international to sign a new deal in Turin until 2024 that would include a buy-back clause, before selling him abroad.

Everton are keen on pursuing a deal as Marco Silva looks to bring in a new signing capable of leading the line for his side next season.

The Italian champions are said to be looking at inserting a buy-back clause of £40.5 million into the proposed new deal after the teenager scored eight goals for them in 2018/19.

Additionally, Sky Sports News believe that the Toffees are among the teams interested in City midfielder Delph, who is in the final year of his contract at the Etihad.

The 29-year-old has been told he is free to leave Manchester this summer, but the Premier League champions are yet to receive a bid.

Delph’s suitors are likely to confirm their interest in the next few days after the England international made just 11 league appearances under Guardiola last term.