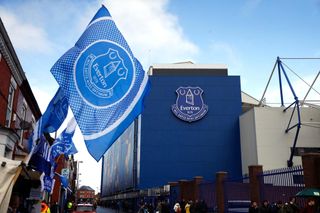 Moise Kean has extra motivation to shine for Everton following the reaction from fans since he joined the club.

The 19-year-old Italy forward completed a switch from Juventus on Sunday on a five-year contract.

In April, Kean was subjected to racist abuse from the stands in a 2-0 Serie A win at Cagliari.

When he scored the second goal late on he stood facing the crowd with his arms spread, something he later posted an image of on Instagram, with the caption: “The best way to respond to racism #notoracism”.

A JustGiving page was created on Sunday which said it was to fund a banner for Goodison Park that will “show Kean we are a family at Everton and united against racism.”

When asked about that at a press conference on Tuesday, Kean said: “It is beautiful. Racism is horrendous and we have to fight hard against racism. I’m going to repay the fans for all they do for me.

“I am feeling even more motivated and willing to repay them by training at 100 per cent of my ability and giving the maximum I can.”

Regarding the general sense of excitement among Everton supporters over his arrival that has been evident on social media, Kean added: “I’ve had a look and I think fans should be repaid on the field, giving 100 per cent of my ability to repay them, playing as good as I can, at the best of my ability.”

After the Cagliari game, Juventus defender Leonardo Bonucci said he thought “the blame is 50-50, because Moise shouldn’t have done that”, and then Juve manager Massimiliano Allegri said Kean “shouldn’t have celebrated in that manner” while also calling for lifetime bans for “the idiots in the crowd.”

Bonucci later claimed his comments had been misunderstood.

The Italian Football Federation decided not to punish Cagliari over the matter.

When asked on Tuesday if he had felt he had not been supported by Juventus, the manager or certain players with regard to the incident, Kean said: “They were on my side, they helped me. Like everybody knows, we have to fight against racism. They were very helpful in this circumstance.”

Kean also said the incident had not been a factor in his decision to come to English football, stressing: “I like Everton. This is the real reason.

“I recognise myself in the team. Everton is looking forward, like me. They are looking ahead, to the future. We are ambitious, both myself and the team, and we can go very far together.”

Kean also said it was a “great gesture” that his mother had been presented with an Everton shirt by the club’s director of football Marcel Brands, adding: “I’ve felt at home straight away.”

Kean says his goal target for the season is “seven as a minimum” – the amount he scored for Juventus last term – and emphasised he is ready to play in Everton’s season-opening Premier League match at Crystal Palace on Saturday.