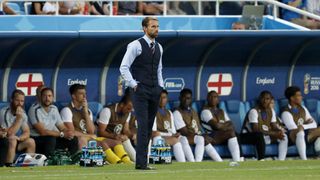 After four days of debating the thought process of England manager Gareth Southgate, the 1-0 defeat to Belgium last Thursday gave every indication as to where his mind was, and it certainly wasn't focused on the round of 16.

Having secured qualification for the World Cup knockout phase after just two games each, Belgium and England found themselves in an intriguing tussle – both wanted to win and finish second simultaneously, for in theory a runner-up spot provided an "easier" route to the final.

And so, Belgium's 1-0 win set them on the path of a potential quarter-final with Brazil – England looked ahead to a last-eight clash with either Sweden or Switzerland.

For some, that will be seen as mission accomplished, maximising their chances of going deep into the competition.

But in Colombia, England's last-16 opponents on Tuesday, Southgate will come up against a side more than capable of leaving him red-faced and making such a decision backfire in spectacular fashion.

Granted, Southgate found himself in a difficult situation.

Our last full day in Repino before the head to Moscow tomorrow.The round of 16 moves closer and closer... July 1, 2018

Had he played his strongest team against Belgium and still lost, his first-choice XI would've surrendered momentum and gone into the Colombia game with their tails between their legs.

And, who's to say England definitely would've defeated Japan if they had finished ahead of Belgium?

But, when in full flight, this Colombia team has the necessary arsenal to take England apart. Let's not forget, they produced one of the most complete team performances of the group phase when sweeping Poland aside 3-0 in Kazan – Juan Fernando Quintero, Juan Cuadrado and James Rodriguez stealing the show.

It has been something of a rollercoaster campaign for Jose Pekerman's side, however. Fitness issues for James – who is a doubt for Tuesday's game – and the early sending off of Carlos Sanchez in their opening 2-1 defeat to Japan being the main talking points.

Yet, this is a team that has shown its mettle.

The crushing win over Poland saw Colombia enter uncharted territory, for this generation had never had such pressure forced upon them – they simply needed to win, a scenario their admirable charge to the last eight four years ago never threw their way as they were generally considered underdogs.

1 - Colombia have become the only side to reach the knockout stages of the 2018 despite losing their opening match of the tournament. Turnaround.   June 28, 2018

"Colombia are a tough team and have got some great players and we have to be ready for that. This is the moment of truth," Harry Kane said, and he's not wrong.

But it's a "moment of truth" not just in the confines of a do-or-die knockout clash, it will also determine whether Southgate's risk and England's perceived arrogance are well-placed or not.

Let's not forget, the two teams England have beaten so far are Tunisia and Panama, neither of whom impressed during their short stays in Russia.

For all the tongue-in-cheek talk of football "coming home" from supporters, Southgate's risky approach has England facing a team absolutely capable of sending them home altogether.